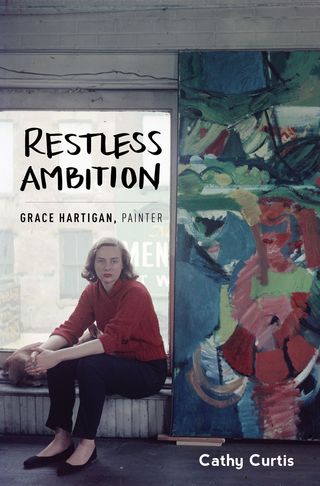 First biography of an artist who was--or so she thought--at the top of her game at age thirty-seven in 1959, when she contracted a severe form of polio in Greece. She relearned her painting skills, simplified her style, and became a critical success . . . and one of America's great watercolorists. Her life as a bisexual woman intersected with leading painters and poets of the era.

A Generous Vision: The Creative Life of Elaine de Kooning

First full-scale biography of Elaine de Kooning, who had a starring role in the close-knit world of New York artists at mid-century.

Watch the podcast, "The Men in Elaine de Kooning's Life":
https://www.youtube.com/watch?v=6_ToZmoA6P8
Or listen to the soundcloud version:
https://soundcloud.com/oupacademic/cathy-curtis-video-final-audio-for-soundcloud

A Generous Vision portrays a woman whose intelligence, droll sense of humor, and generosity of spirit endeared her to friends and gave her a starring role in the close-knit world of New York artists. Her zest for adventure and freewheeling spending were as legendary as her ever-present cigarette.

Flamboyant and witty in person, she was an incisive art writer who expressed maverick opinions in a deceptively casual style. As a painter, she melded Abstract Expressionism with a lifelong interest in bodily movement to capture subjects as diverse as President John F. Kennedy, basketball players, and bullfights.

In her romantic life, she went her own way, always keen for male attention. But she credited her husband, Willem de Kooning, as her greatest influence; rather than being overshadowed by his fame, she worked "in his light." Nearly two decades after their separation, after finally embracing sobriety herself, she returned to his side to rescue him from severe alcoholism.

Based on painstaking research and dozens of interviews, A Generous Vision brings to life a leading figure of twentieth-century art who lived a full and fascinating life on her own terms.

"Biographies like Curtis's offer a corrective to art history and the art market, which too often focus on mythical art stars and singular "geniuses." Friends, lovers and associates can contribute equally to making, explaining and preserving artists' work and their legacies."
— Martha Schwendener, New York Times (Jan. 14, 2018)

"Ms. Curtis's careful research allows her to raise pertinent questions about many stories and correct others, but she also presents alternative versions of some of the better-known incidents. . . . These sometimes opposing quotations from a wide variety of Elaine's friends, colleagues and relations, threaded through the text, enliven the book . . . Ms. Curtis evokes the alcohol-fueled New York art world in the 1940s, as well as the atmosphere of such avant-garde centers as Black Mountain College and Provincetown, and provides capsule portraits of many of the artists, writers, critics, dealers and curators who inhabited that world—many of whom Elaine painted. . . . Elaine de Kooning comes vividly alive in "A Generous Vision."
— Karen Wilkin, The Wall Street Journal (Jan. 6, 2018)

The first biography of leading Abstract Expressionist painter Grace Hartigan traces her rise from virtually self-taught painter to art-world fame and her plunge into obscurity after leaving New York to marry a scientist in Baltimore. Along the way, there were multiple affairs, four troubled marriages, a long battle with alcoholism, and a chilly relationship with her only child.

Attempting to channel her vague ambitions after an early marriage, Hartigan struggled to master the basics of drawing in night-school classes. She moved to New York in her early twenties, befriending Willem de Kooning, Jackson Pollock, and other artists who were pioneering Abstract Expressionism.

Although praised for the coloristic brio of her abstract paintings, she began working figuratively, a move that was much criticized but ultimately vindicated when the Museum of Modern Art purchased her painting The Persian Jacket in 1953. By the mid-fifties, she freely combined abstract and representational elements.

Grace—who signed her paintings “Hartigan”—was a full-fledged member of the “men’s club” that was the 1950s art scene. Featured in Time, Newsweek, Life, and Look, she was the only woman in MoMA’s groundbreaking 12 Americans exhibition in 1956, and the youngest artist—and again, only woman—in The New American Painting, which toured Europe in 1958–1959.

Two years later she moved to Baltimore, where she became legendary for tough-love counsel to her graduate art students at the Maryland Institute College of Art. Grace continued to paint throughout her life, seeking—for better or worse—something truer and fiercer than beauty.

Restless Ambition draws on Hartigan's emotionally revealing journal and numerous candid interviews. The biography includes reproductions of many of her finest works from the 1950s and ’60s, as well as rarely-published photographs of her as a young woman at the height of her fame.

First biography of a prominent artist who retaught herself how to paint after becoming  paraplegic, and became even more accomplished than she was before.

A Generous Vision: The Creative Life of Elaine de Kooning
First full-scale biography of Elaine de Kooning, who had a starring roll in the close-knit world of New York artists at mid-century.
Restless Ambition: Grace Hartigan, Painter
The first biography of leading Abstract Expressionist painter Grace Hartigan traces her rise from virtually self-taught painter to art-world fame and her plunge into obscurity after leaving New York to marry a scientist in Baltimore. Along the way, there were multiple affairs, four troubled marriages, a long battle with alcoholism, and a chilly relationship with her only child.
Authors Guild
Advocates for published authors since 1912
Authors Guild Directory
A compendium of member websites
Loading…}